Eid Ul Fitr 2016 . So it was the 1st Day of Eid Ul Fitr , the morning was eventful, the excitement of going to pray in Eid Salaat, seeing new and old faces, shoulder to shoulder as one Ummah… the beauty of congregational prayer and sense of oneness in indescribable… Back at home, the house was relatively quiet, the absence of the children was so real, tears rushing to my eyes, having to remind myself that it is what it is, and I have to make the best out of what I have… our breakfast was rather simple by comparison, but it sufficed.   Finally I get to put my feet up, laptop in place and began my all too familiar skype calls, exchange of greetings, lump in my throat…  Lunch time came and went, before we knew it, Fatima had to resume her duties at work, leaving me to my solitude. Armed with my Nikon, I set out to explore  the Education City Mosque.    The spectacular mosque with its trademark minarets that stretch up 90m into the sky which point straight towards Makkah, has become a new highlight in Doha.  The mosque with its capacity of 1,800 worshippers in its main prayer hall and exterior courtyards and its exterior elevation covered with embossed verses from the Qur’an, rests on five main structural columns, representing the 5 pillars of Islam. Four streams of water each representing wine, milk, honey and water, flow from the surrounding gardens into the building. A modern structure, to say the least.

Once inside, the minimalist and contemporary aesthetic exudes calmness, serenity yet warm and welcoming. The modern twist of the arabesque designs with different mediums so evident, the geometric patterns so intricate yet so simple.

The Mihrab features a golden text and a Qur’anic ayat which translates as: “So turn your face toward al-Masjid al-Haram. And wherever you [believers] are, turn your faces toward it [in prayer].” 2:144T

The call to prayer so soothing and so welcoming, followed by the total surrender of the worshippers.

It was time to visit the courtyard and some picture taking.

sparkles on the ceiling 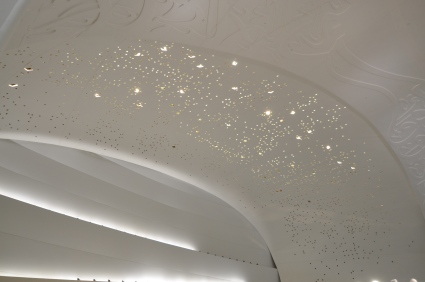 exterior of the mosque

2 replies to A Day in my Life!