Over 5000 years ago, falconry began to solidify its place in the Arab world, particularly in the Middle East. Over the next few centuries, the art traveled across the globe. Early Bedouin tribes used falcons for hunting, as they’d discovered that it was easier to use the falcon to take down birds, than shooting them. It should come as no surprise that these birds would be so good at what they do. Naturally, falcons hunt smaller birds and sometimes bats. They catch their prey in mid-flight and hunt from above, circling the skies until they see their prey. When they dive to catch their prey, a falcon can reach speeds of up to 320 km/h (about 200 mi/hr). This set the stage for what was to become the sport of modern falconry, both in the gulf, and worldwide.

Falcons are known to be found at the falcon souqs close to Souq Waqif in downtown Doha, varying across a range of prices, from a few thousand Qatari riyals, to a few hundreds of thousands! Just like horses, falcons are awarded their own passports, in order to regulate and control their buying and selling, as well as to prevent theft. 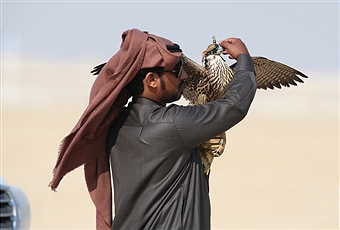 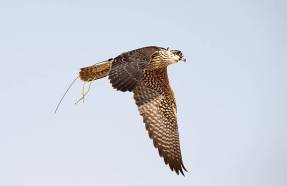 To be a falconer is not simply just to own a falcon. It also will cost you to have the necessary equipment to house, maintain and train your bird. This includes tags which are fixed onto the birds in order to track or identify them , should they fly too far away from home, communication devices, perches, cadges, hoods, and many other gadgets. If you’re planning on becoming a falconer, be advised that it takes great amounts of time and patience!

The hunting season in Qatar lasts only a few month during Winter, gradually coming to a halt in April, so falcon enthusiasts are keen to make the most of that time. People spend a lot of time during the year training their falcons, some even going abroad to different climatic zones to train their birds! In Qatar, the peregrine falcon is the most common and has deeply-rooted seat in Qatari history, followed by the Gyr and Saker kinds. The peregrine tends to be the most fierce. Female Saker falcons are superior to the males in terms of their size, strength and beauty. The Gyr falcon originates from areas around the North Pole. It is highly-valued, is able to cover long distances and was once referred as “the bird of kings and nobles” 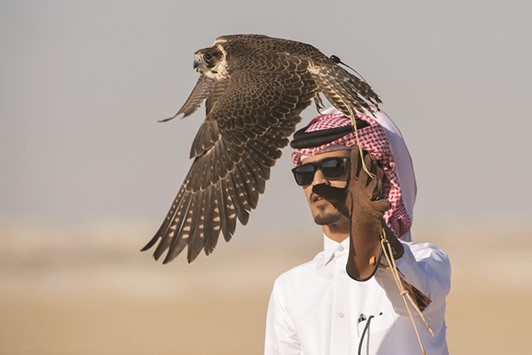 The 9th Qatar International Falcons and Hunting Festival, better known as Marmi, has many migrating to Sealine this time of year, either to compete in the tournament or two spectate.  This festival is focused on falconry and hunting, using Saluki hounds. Starting in 2010, Marmi is organized annually under the patronage of H.E. Sheikh Joan bin Hamad bin Khalifa Al-Thani.

During the festival, one may be able to join in on different types of competition. Let us begin with those pertaining to the falcons:
Firstly, only peregrines are allowed to compete. Secondly, enterants should have been trained using traditional methods. These parameters are put in place in order to preserve how things were done in older times…

Falconry has also been incorporated into the 2010 UNESCO Intangible Cultural Heritage list. Be sure not to miss this event…

2 replies to Fussing over Falcons